The Ottomans ruled with Macedonia and the rest of the Balkan for about five centuries, from the end of XV till the beginning of XX century. Their influence during that period was strong in many aspects of the local’s life. That influence has left a mark that stays even today, especially vivid when visiting the old bazaars or charshija (the Turkish word for bazaar) in the modern Balkan cities.

The Old Bazaar in Skopje is a place with many hidden gems.  Going through it in a hurry is a big mistake. You need at least half a day for a complete experience so you can have time to walk through the small streets full of shops, relax in some of the restaurants for lunch, drinking Turkish coffee or tea, maybe some dessert or to enjoy the architecture and buying souvenirs.

Today I’ll take you on a tour of the Skopje’s Old Bazaar. We are entering from the city square over the Stone Bridge. After passing all those new statues and baroque buildings, you are entering a different world, like traveling through time.

The first building that you will notice on your right, sticking out from everything else you saw so far in the center of the city, is the Daut Pasha Hamam. It’s a Turkish bath build in the second half of XV century by Daut Pasha. There are many stories and legends connected to it, especially about the small circular windows with a form of a star from inside. When the moon is full, the inside is filled with stars. If you want to hear more, I will tell you once you visit Skopje. The modern Macedonian art can be seen inside this building as it is the National Art Galery now. 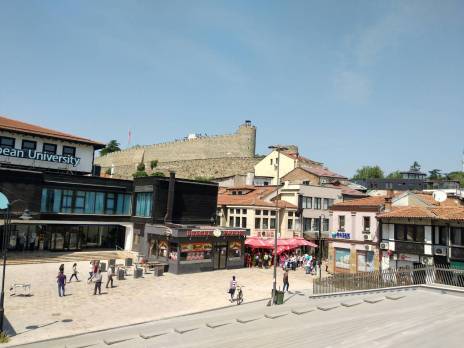 Before entering the Old Bazar, I’ll take you up the stairs on our right, to enjoy this view of the Kale Fortress, built in the VI century by the Bisantian imperator Justinian Prima. Then we continue in the small streets full of surprises. 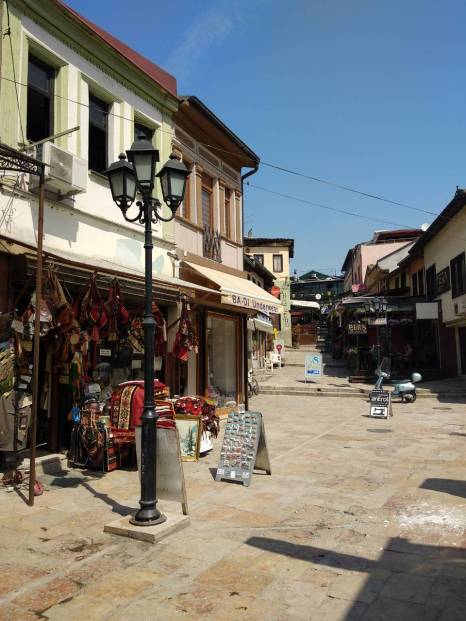 We take the second street to the right, where the restaurant area is luring us with the smell of the local kebabs, the most famous national dish tavchegravche (baked beans), as well as other aromas coming from the delicaties of the national cuisine. 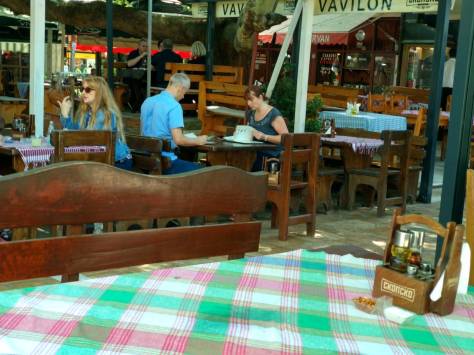 However, we just started the tour, and won’t be having a lunch break now. I’ve taken you here to show you the first hidden gem, the Ottoman version of a taverna, Kapan An. To reach it we have to go through the tables and down the stairs. In front of us appears the yard of what used to be a place to overnight and eat in Ottoman period. We can see that even today it has a similar use, having few operating restaurants.

The next photo shows our next stop; one of the gates of a complex that used to be a kind of mall in Ottoman period, known as Bezisten.

The Old Bazaar of Skopje is where the Muslims were living during the Ottoman rule of the town. So, don’t be surprised by the many religious objects, always build as a complex of a mosque, fountain, and turbe. When it’s time to pray you will hear the call to the Muslim believers to pray. It makes one feel as if visiting an oriental destination.

Most of the mosques are still active, while the Turkish baths are used as galleries and the accommodation objects as museums or halls for cultural events. We are entering through the gate of one of those buildings, Suli An, to admire the contemporary art exhibition located in its yard.

Our tour takes us next to Kursumli An, used for some concerts and other events, unfortunately, closed for visiting today. But next to it is the Museum Macedonia in which it is possible to visit the Ethno exhibition, Icon Gallery, and the War Museum. 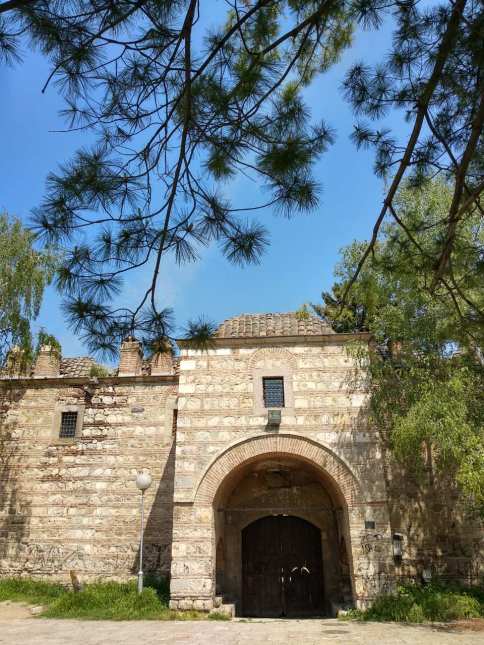 If you continue straight to some of the parallel streets you will come to the green market and Female market. This time we are going to the left up on the hill. It’s not so steep, so it’s a very easy walk.

On the way, we will see my favorite street in the Old Bazaar. That’s the one where the umbrellas are, a perfect spot for taking photos.

I would like to introduce you to Anzelika, a special lady that I met previous week. Every time when I was passing this street my eye was caught by these unique souvenirs at her shop. From a friend of mine, I find out that the owner is an artist and she makes and paints unique souvenir, jewelry, and decorations on glass, ceramics, linen, records, CDs and other materials.

Anzelika together with the neighboring shop and restaurant owners hanged the umbrellas and the street got this cheerful spirit. If you want something unique from Skopje this is the perfect place for you. 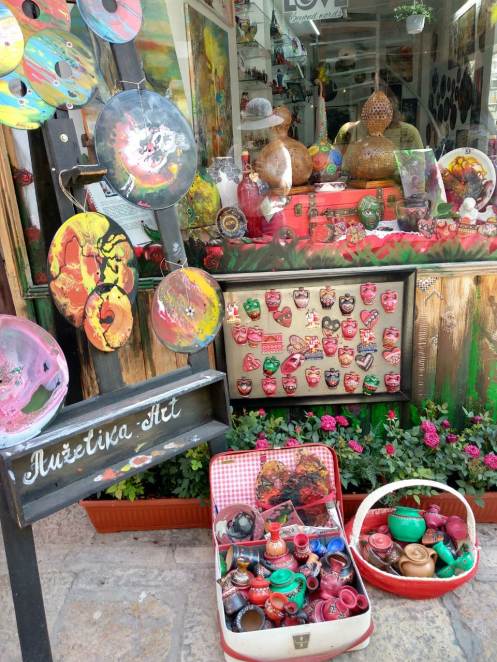 There used to be a “golden street” in the past where we are now. Imagine all of the shops on this street were for gold. Now all the shops are mixed, while the shops selling gold and souvenirs are dominating. 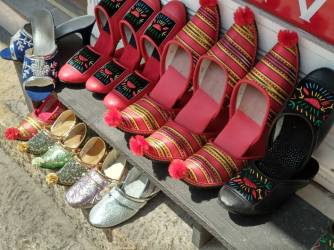 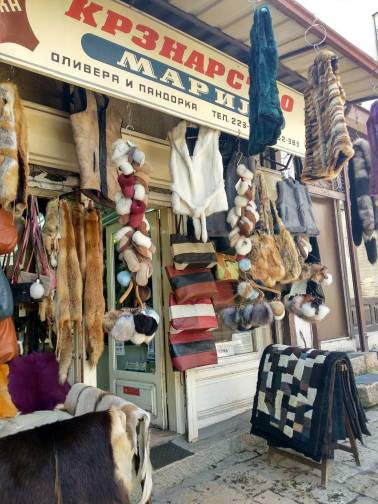 From the other souvenirs that are different than other places, I would like to point out the leader shoes, which can be small as magnets or keyrings or they may fit your feet perfectly. These are traditional shoes, worn only by the folklore dancers nowadays.

It’s time to continue our tour to the hill. On the way, we will visit the yard of the church Holly Salvation, build in XIX century on the same place where an older church was. That was burned by a fire in XVI century because of a plague. As you can see in the photo it is very small and modest from the outside, while the inside is much bigger since it was constructed 2 meters underground. 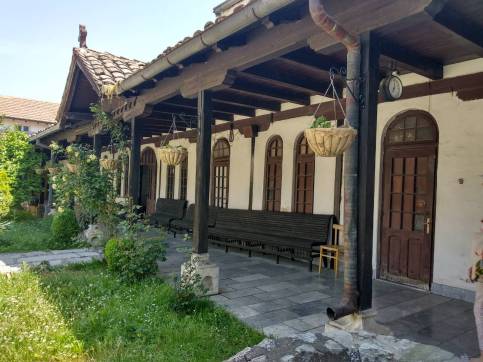 The reason is that when this church was built the Ottoman Empire was still present. Although they allowed for churches to be built so that the people would be happy and obedient, they had one rule: the church to be on a lower level than the mosque. So, on the skyline, we see the minaret of the mosque. The church is famous because of the wood-carved iconostasis.

There is a sarcophagus of the leader of the Macedonian rebels against the Ottomans -Goce Delcev and a small museum dedicated to him. We continue in direction to the minaret behind the church.

With an amazing view of the rest of the Muslim part of the city, on top of the hill, the Mustafa Pasha Mosque is located. The army of Mustafa Pasha was situated in the Kale Fortress, near the mosque, and as they needed a place to pray, they built this mosque.

This is a window from the inside.

Our tour ends here, and I suggest you take some of the stairs from the church down to the Bazaar and relax in some of the numerous coffee bars or restaurants, maybe even try a nargile. Observe the passers-by and relax.

The Old Bazaar of Skopje is a place where you can feel the transition of centuries in front of your eyes. I made the photos in one hour walk with my friend Mira before my group arrived. I have to say we spent a great time together and I felt like a tourist and I reminded myself how much I love Skopje.